“We who build shrines and construct public altars or parade with photographs of the deceased will not allow you to write off victims as regrettable statistics…They are, I believe, the voice of the people.” –Jack Santino

I will be sharing a series of articles from the Inland Empire-based newspaper The Press-Enterprise regarding a proposed Veterans memorial in Lake Elsinore, California and then writing a post about it in the context of spontaneous shrines.  Here is the first article from PE on October 24th: 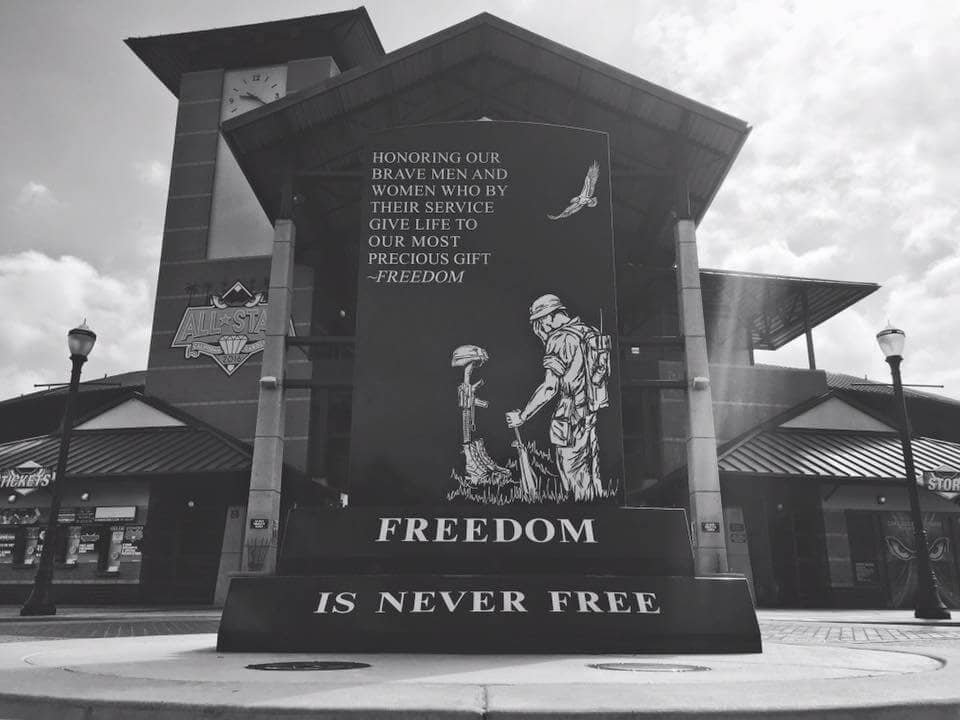 The Lake Elsinore City Council will vote on the project at 7 p.m. Tuesday. The cost is put at $46,172

A black granite memorial to military veterans has been proposed for the main entrance to the Lake Elsinore Storm’s Diamond Stadium.

The six-foot-tall memorial will feature a set of polished black granite pedestals set on a raised concrete circle in front of the stadium entrance. Five small pedestals will be engraved with the emblems of each branch of the armed forces, surrounding a taller, central monument with text over an American Flag.

The base of the monument, under the silhouette of a soldier kneeling in front of a cross, will read: “Freedom is Never Free.”

The design was chosen by a committee of Mayor Brian Tisdale, Lake Elsinore Historical Society President Joyce Hohenadl and representatives from local veterans groups, according to a city report.

Hohenadl said the group wanted a prominent location, so they decided to put the memorial right where baseball fans walk in to buy their tickets for Storm games.

“We thought that would be the most visible place for it,” Hohenadl said.

The memorial will be built by Sun City Granite, a Perris company known for its work with the military. The engraving company produces headstones for all fallen troops buried at Riverside National Cemetery.

How To Reach Us

Schedule An Appointment With Our Design Staff